google-site-verification=xxBKZrTUzi0XAr0lbrcOZP2fSO3HwsNjVLIfdx_7qlg google-site-verification=xxBKZrTUzi0XAr0lbrcOZP2fSO3HwsNjVLIfdx_7qlg
Benin Chiefs Resistance to  British Colonial rule
March 1897
March 18: A report by British troops confirms the killing of Enojie (referred to as headman) of Orio for attempting to escape whilst being forced to guard officials to the king’s hideout.

Amofia, a new town, is destroyed for recently harbouring the king who has now escaped.

April 1897
Warrior chief Ebeikhinmwin, a Benin resistance hero, is summarily executed after he is betrayed by another chief.

April 23: Captain Roupell whilst pursuing a chief, reports burning down two villages and collecting their livestock.

August 1897
As a result of the ongoing violence and destruction of people’s homes and livelihood, the King and chiefs voluntarily give themselves up to put an end to the people's suffering. Their court trial is planned for early September.

September 1897
Four chiefs are hanged and the king exiled.

However, the violence towards the people does not end there due to the continued resistance of Chiefs Ologbosere and other chiefs amongst whom are Chiefs Ebohon and Oviawe. They maintain their areas of jurisdiction in defiance of colonial rule.

For the next two years and more the British are fully engaged in the worst bush-fighting in their history.

January 1898
There is strong rivalry between the Niger Coast Protectorate administration which had conquered Benin and the Royal Niger Company which is laying claims to the Benin country areas for George Goldie.  Read more--->

The town of Irrua is burnt down by the Royal Niger Company who are trying to annex the area to add to George Goldie's territories.

May 1898
The British undertake a comprehensive reconnaissance of the resistance areas which are currently under the rule of Benin chiefs. The chiefs had mandated the people not to pledge allegiance to British rule and to destroy symbols of British authority like their flags, outposts and rest houses.

Resident R.K. Granvile’s report on the reconnaissance of the areas confirms the burning and destruction of the towns of Eko, Ologbosere, Ovbi-Ehor, Isure and Okemue.

The reconnaissance troops also report the burning down of every community on their way to the territories of the rebel chiefs mentioned above.

April– May 1899
British Forces undertake another expedition, ‘Benin Territories Expedition of 20th – 16th May 1899’. This time, their monstrosities to the people (burning down houses, taking livestock, shooting people) have been intensified. According to Galwey, this was necessary because, ‘So long as they (Chiefs) are at large, so long will the prestige of British government hang in the balance.’

The troops burn down rebuilt towns of Okemue, Eko and Ologbosere.  Additionally, they level every house to the ground and the people are made homeless.

22 April 1899 - During this expedition, British officers lead an invasion into Benin country areas of Esanland. These areas had been protected from invasion by General Ologbosere and the other rebel warrior chiefs. Esanland soldiers take up their own defence and their tactics of defence is guerrilla warfare followed by retreat. This keeps British led troops occupied for the next seven years and unable to penetrate inland.

By this time, some chiefs have been enticed and co-opted into the administration by the British with the promise that they would be put in charge of towns recovered by the expeditions. With depleting numbers of rebel chiefs, local communities now starving due to their farms burnt and livestock taken, capture Chiefs Ologbosere and Ebohen and hand them over to British officials.

June 27 and 28 - Chiefs Ologbosere and Ebohen are trialled and hanged. This brings Benin chiefs resistance to an end.

The end of armed resistance does not stop the violence towards the people. The British adopt a policy of, ‘ in the event of natives not complying with the instruction….the villages concerned will be considered unfriendly and dealt with accordingly”.

28 December  1899
Foreign Office London revokes Royal Niger Company charter due to all the territorial claims it is making.

16 March 1901- British troops attack Uromi land. The Resistance is led by Prince Okojie. He is eventually betrayed by some natives seeking British favour. Prince Okojie is caught and banished to the British Consular office at Calabar but returns due to ongoing rebellions and warfare at home.

1905 – Urhonigbe is destroyed due to refusal to pay tributes.

1906 – During the uprising of 1906, section of Owa town is burnt down when a forest guard was attacked for trying to force the people to tap rubber against advice of local knowledge.

Esanland is finally brought under British control after near annihilation of local people.  Displaced people facing starvation to death had no option but to surrender. The thirty-four dukedoms that make up Esanland are amalgamated into Ishan Division for easy administration by the British.

July 1914 – Armed troops are withdrawn from communities due to the start of the First World War.

1914 - 1918
The First World War efforts (costs) mark the beginning of the end for the British Empire which is the world’s foremost super power. The war has left 8 million soldiers dead and 21 million injured.

Bankrupt and dependent on America, Britain no longer has the will, desire or capability to maintain the empire and begins to grant independence to its colonies.

Thus, the British Empire gradually begins to come to an end. 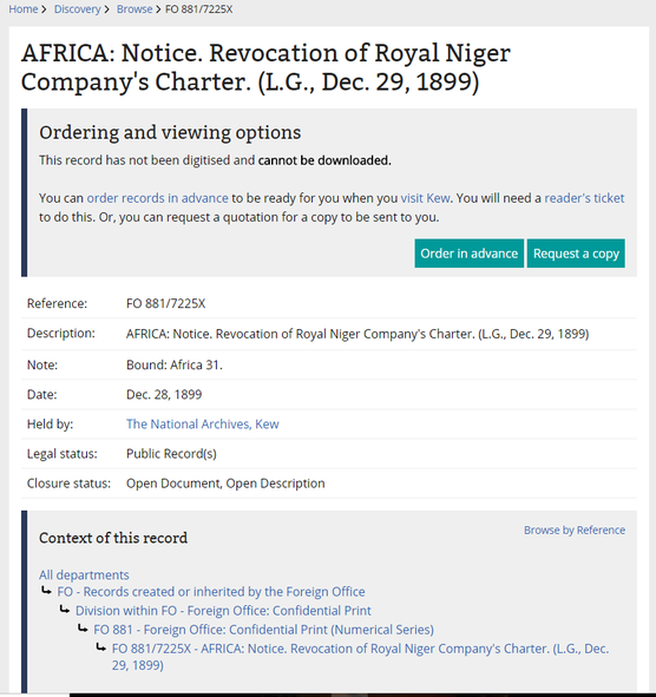