A letter to Sir Reginald Bacon on his book: Benin City of Blood

I have read and pondered on your book: Benin City of Blood many a times and admire the spirit in which you wrote it for an audience 120 years ago.

In your book you wondered several times about how history would view British intervention in Benin during this critical period of Making of the Modern World. Would it be seen as a good thing or a bad thing? I can tell you 120 years on, that the jury is still out on that one. But the overwhelming evidence is currently leaning towards good. Today, thanks to all the efforts of the past generations, the world is one giant e-page with the advancement of the internet and the World Wide Web.

Knowing your disposition, you would probably have kept detailed record for future generations on that subject (WWW) too. We now know that you embellish and include misinformation. So your report will have to be viewed with caution.

Regarding the contents of your book, there are several issues that I would like to pick a bone with you on:

First of all, thanks to you and the others including Consul General Moor and the Expedition surgeon Dr Roth, we have detailed account of what happened during that fateful Benin Expedition. We have a record of who took part in this and where they came from. You did not give an indication of method of payment to the thousands of native locals who provided you with help throughout the expedition. I am curious to know.

I used to wonder about how the British were able to successfully invade a country closed to foreigners and which they had never been inside. From your book, I found out that some high ranking Itsekiri chiefs provided you with local mappers who knew Benin City very well and they drew you an accurate plan of the place. This helped you locate places of interest which you burnt down. These included the Queen Mother’s house.

Did you know that your good guide Owaghi whom you described as very clever was of Benin origin? He was betraying his country by showing you the route. By England’s standard that action was and still is considered treason. As you very well know the punishment across the world for treason at that time was execution. Owaghi had he been caught would have faced execution.

Captain Bacon, may I be bold enough to get you to reconsider your position on stating that there was evidence of human sacrifices across the city? Put it this way, traitors were executed and using the term human sacrifice for this is not quite accurate and is a misrepresentation of facts. From your account, thousands of local natives betrayed the people of Benin. Most importantly, it was only slaves who, it had been proven, had taken the life of another that were ever executed ( (READ C.H, & DALTON O,M,  1899, PAGE 6). You will agree that worldwide at the time, the punishment for murder was capital punishment. The last capital punishment in Britain took place in 1964 - hung Peter Anthony Allen on August 13 1964 (67 years after the Benin Expedition). Remember the saying, ' Why do you see the speck that is in your brother’s eye, but do not notice the log that is in your own eye?'.
​
You mentioned on page 13 of your book that Benin was the center of slave trade during the earlier part of your century. This is incorrect. The Benin kings would never have traded in fellow human beings; they would have believed that some people’s spirits would bring bad luck on their country. Do you remember the man who told you that the shape of his head saved him from being sacrificed (i.e. executed)? The Benin people believed that his abnormal shaped head would bring bad luck on their country should they execute him so they set him free after his crime of treason (betrayal). The Benin people held many such beliefs primarily to protect the weak and the disabled; and considering the number of slaves sold and transported by slavers [see estimate here --->] very few would have met their stringent natural justice repercussion criteria.

According to Benin elders, ‘The white men stayed long, many many years; they came to trade, and if a man comes to trade he must sit down and sell his things softly, softly,—they used to buy ivory, redwood, oil, gum and slaves, but principally ivory—in return they brought guns, powder, rum, salt, cloth and silk. Then there was a different white man who used to come, but he only bought slaves. When he came, a messenger used to come before him to tell everyone he was coming; then if a man had any slaves to sell, he could send to farm to get them. But he only paid a poor price, 1-4 bags.’(READ C.H, & DALTON O,M, 1899, PAGE 5).

This evidence surely shows that the Benin people did not engage in commercial buying and selling of slaves. Yes, there was the occasional selling of a handful of domestic slaves but these were not for profit but mainly to oblige their White men friends. The farmers needed hands on their farms to grow crops for food and sale and most importantly domestic slaves were part of their households and were cared about.

Fact: From about 1550, the warrior kings Oba Esigie and Oba Orhogbua banned slave exports [Disney A. R. 2009, p.63]. Benin kingdom was therefore the first to ban slave exports and prohibit the transatlantic slave trade. This was over 253 years before Denmark and over 260 years before Britain conceived the idea [abcnews.go.com].

Captain Sir, you must have known these facts when you chose to publish misleading information about the Benin people and the Transatlantic Slave Trade [see map of the Niger River below]. I cannot say that I am impressed with this deliberate misinformation on your part.

It is also very important to note that since 1550 there is no record anywhere to date that includes slaves as part of the commodities traded with Europeans by the Kings of Benin (Boisragon, 1897, p. 8). The only person to ever make reference to slave trade is Captain Gallwey when he alleged in 1892 that his party 'saw the remains of an old slave barracoon close outside the city.' (Boisragon, 1897, p.12) Captain Bacon Sir, surely you would agree that this is nonsense talk as Benin City is not close to any sea port and if as alleged it was sighted outside the city, it would not have been under the jurisdiction of the Benin kings. And most importantly, evidence provided by Benin Royal Chiefs to Consul General Moor in November 1897 stated categorically that the whitemen built this themselves in Gwatto. Please read here ---> I would therefore be very grateful Sir, if slave trade does not go down in history as one of the 'curiosities or crimes' of Benin.

During your march on Benin City, you stated that when advancing on a path, the precaution against enemy ambush was by firing volleys (bullets) into the bush on either side at intervals of 1 -2 minutes. You also stated that no Benin fighter was sighted on your way up to Benin and that only one dead body did you see all that way. However, on your return journey you saw a heap of about twenty- nine dead bodies.

Captain Sir, may I once again, get you to reconsider your account of stating that dead bodies were strewn all over compounds in Benin. You mentioned somewhere in your book that they took away their dead bodies quickly. Surely Sir, you can understand that if the dead bodies from your maxim guns and volleys were not left in the forest (bush) they were taken somewhere.  Benin custom was to bury their dead in their compounds. Is it not plausible that as the city was being evacuated in a hurry, they did not have time to give their loved ones a proper burial and so dumped them in hurry in dug pits. Your superiors Consul General Moor and Admiral Rawson certainly recorded only these fact in their reports but you had to take the description to a higher level with peddling misinformation.

Captain Sir, surely you can see how responsibility for all the dead bodies in Benin lie with you the British? You gunned down thousands of Benin people with your Maxim guns and volleys. A Maxim Gun could fire 600 rounds in one minute (Willis, S. Dr. 2017). 5 Maxim Guns killed 3,000 people in one minute. The dead bodies then had to be buried or dumped in mass graves across Benin.

From page 84 of your book, we get to find out that buildings and compounds in Benin City were unoccupied. In fact, the whole city was empty. As you mentioned earlier on, all the villages and towns on the outskirts of Benin City had been evacuated because the people did not want to be in your way. Benin had also been evacuated.

Captain Sir, this is my last point. Surely, you were not expecting a red carpet and a big fanfare to welcome you into the city you were coming to occupy and to burn down? You stated that you found blood, blood, everywhere. The sights and smells made you physically sick four times and you continued to feel sick. The impression I get from this description is that the clever Benin people took whatever steps necessary to make their city uninhabitable for you. You had maxims guns and the latest equipment in warfare, they had intelligence to defeat you by whatever means necessary.

I am sorry that you vomited violently four times due to the sights and smells of the blood everywhere but the blood you saw was not of human beings but of animals. The blood everywhere could also have been symbolic, to show you that you had Benin blood on your hands.  Had you considered this?

Your last paragraph stated that you were putting down your pen in shudder.  I do not know what to say to you on that one but I do know that when you stated that the tale is finished, it was far from the truth.  We now know that it was just the beginning and by the looks of things it will be added to for generations to come.

One other matter, we have investigated your claim that you rescued slaves buried in pits with dead bodies. Your superiors' reports to London throughout the expedition stated  'A few natives of Phillips party have come in from the bush.' (Moor, 22 February 1897). Admiral Rawson referred to them as 'liberated slaves' and 'Pit full of dead bodies' (Rawson, February 27 1897).

Captain Sir, did you think that you'd never be found out? Well now you have been exposed. That is technology for you and I hope that you are truly ashamed of yourself. You did not need to embellish the situation to such extents. Should we now discount all those other books that you published particularly as they were meant to be books of facts. Your book on the Benin Expedition contained fiction and many inaccuracies and I find it difficult to believe that the others do not.

I am genuinely disappointed in you. 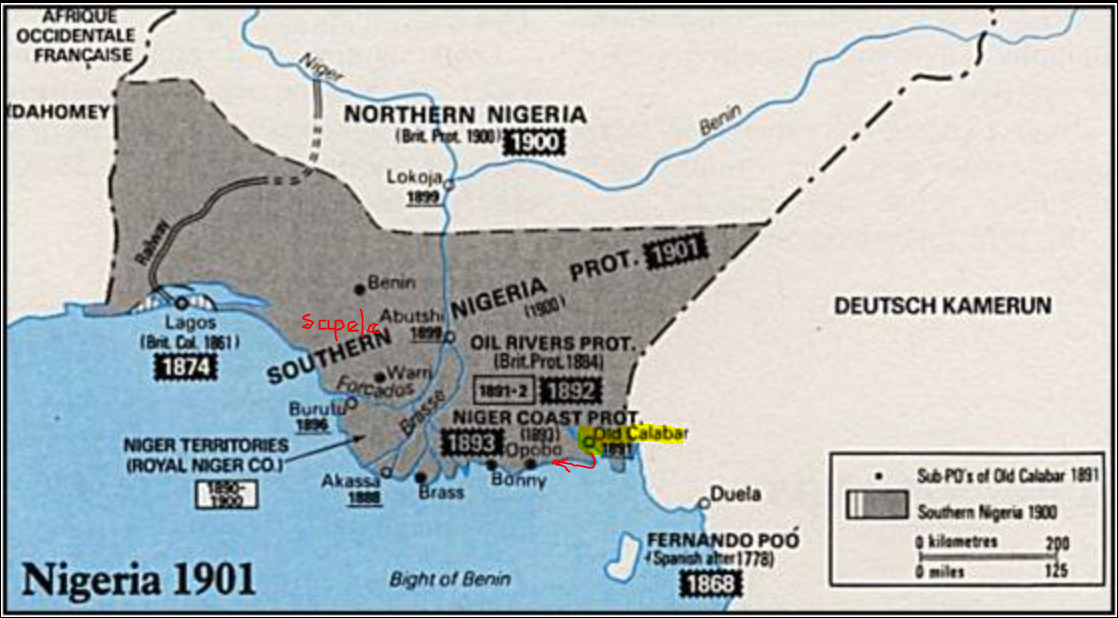 This work is licensed under a Creative Commons Attribution-ShareAlike 4.0 International License.
Powered by